Villain in a White Suit 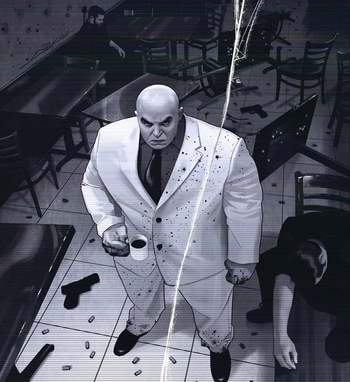 With that suit, he's got nothing to hide about his crimes.
"[Tom Wolfe] has said that the outfit disarms the people he observes, making him, in their eyes, 'a man from Mars, the man who didn't know anything and was eager to know.'"
— Wikipedia on Tom Wolfe's white suit

Villains who are in management positions, such as mob bosses and aristocrats, can often be found wearing formal clothing. Wearing bright white suits draws a stark contrast against their villainy, just as their display of culture and wealth contrasts against the teams of low-brow grunts who enforce their will.

Due to their role in the organization (near, if not at the top), these characters tend not to be very hands-on, planning things out and ordering mooks to carry out the plans. During a Mob-Boss Suit Fitting, both their organisational skills and taste in clothing can be emphasized. Don't be surprised if the fancy suit also symbolizes their ability to beat up their own thugs. Then again, it can also be used to foreshadow their inevitable (and bloody) downfall.

Not technically gendered, as a woman in a tailored white dress or pantsuit and similar position in a villainous organization would still apply, but this list skews heavily towards male examples.

Sub-Trope to Light Is Not Good (subverting the association of white/light with Good), Man of Wealth and Taste (classily-dressed villain), and Wicked Cultured (villains with an interest in consuming and sharing high-class culture). Super-Trope to Fat, Sweaty Southerner in a White Suit, where the villain has political control of a rural area, obesity/gluttony, and a white suit (that typically needs cleaning). Speaking of baddies in hot climates—where lighter-colored clothes, which absorb less heat, come in handy—another character likely to dress like this is an Evil Colonialist in the tropics. Contrast with Evil Wears Black (villainy is associated with black clothing) and Fashion-Victim Villain (villains with flamboyantly bad/weird taste in clothing).

See also The Rich Have White Stuff, where characters are shown to be rich by having possessions (including homes and clothing) ostentatiously white. Can lean towards White Is Pure when the villain is obsessed with keeping their suit clean.

The true main antagonist of Rift Apart. After being impersonated by his alternate self while he was away researching the means to bridge worlds, the Emperor returns with a vengeance and forcefully reclaims his throne, dragging Dr. Nefarious along as he seeks the ultimate prize - to conquer every dimension imaginable.

The true main antagonist of Rift Apart. After being impersonated by his alternate self while he was away researching the means to bridge worlds, the Emperor returns with a vengeance and forcefully reclaims his throne, dragging Dr. Nefarious along as he seeks the ultimate prize - to conquer every dimension imaginable.