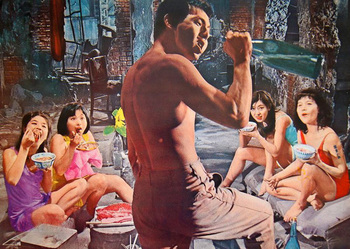 Gate of Flesh is a 1964 film directed by Seijun Suzuki.

Tokyo, at some point relatively soon after the end of World War II. The city is a burned-out slum, ridden with crime, with seemingly the only growth industry being the sex trade, as Japanese women sell themselves to oafish American servicemen.

A young woman named Maya is wandering the streets, stealing for food. She winds up in the company of a band of hookers, led by hard-as-nails Sen. Sen explains that their group has one rule: never, never give it to a man for free. When a member of their troupe named Ofuku is caught having sex with a man for free, they hack off Ofuku's hair before ejecting her from their bombed-out ruin of a home.

Into this group comes Shintaro (Joe Shishido) a Japanese soldier who has just come home from the war in China. Shintaro takes refuge with the ladies after he is shot in the leg while fleeing from American MPs—it seems that he stabbed an American soldier. The presence of the rugged, manly Shintaro tests the women's pledge not to have sex for pleasure. In the end, he forms the closest bond with Maya.