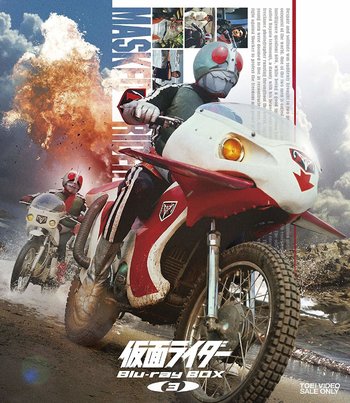 The one that started it all.
Takeshi Hongo is the Kamen Rider, a cyborg. He was modified by the evil Shocker, a secret organization plotting world domination. Kamen Rider has pledged to fight Shocker and free humanity!
Opening Narration.note From episodes 15-52, Hongo's name was replaced with Hayato Ichimonji as the main character.
Advertisement:

The series that started it all.

Kamen Rider (translated in English as Masked Rider) is a Japanese tokusatsu series created by Shotaro Ishinomori and produced by Toei Company. It is the first entry in the Kamen Rider series aired from 1971-1973.

Takeshi Hongo was once an ordinary college student and motorcycle enthusiast until the day he was abducted by a secret evil organisation called Shocker. Taken to their underground labs, Takeshi became a victim of Shocker's Super Soldier program and was transformed into a cyborg against his will. But before they could complete his Brainwashing, Takeshi was set free by the Heroic Sacrifice of an unwilling Shocker scientist named Professor Midorikawa. Now Takeshi uses his physical and mental enhancements to fight against Shocker and prevent another tragedy like his, re-christening himself as the Kamen Rider.

He is later joined by Kamen Rider 2: Hayato Ichimonji, a photographer who Takeshi saves from the same Super Soldier program. His second ally is Kazuya Taki, an intrepid FBI agent investigating Shocker.

On February 28, 2021, Seven Seas Entertainment announced that it will be releasing the original manga. The manga was released on January 4, 2022.

Now it has its own character page.

Voted #1 series in the Showa era and #9 product overall in NHK’s All Kamen Rider Popularity Vote.