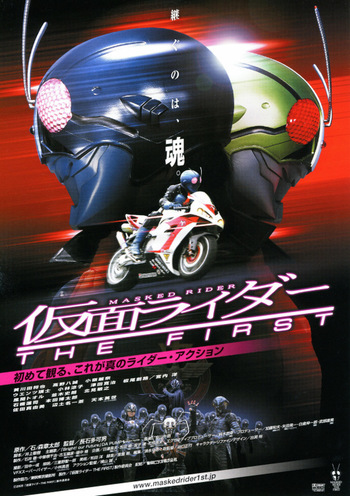 "Those who inherit, the soul."
Advertisement:

In 2005, Toei's latest entry in its Kamen Rider series, Kamen Rider Hibiki, fell victim to the conflicting desires of executives and storytellers.

Also in 2005, Toei decided to reintroduce the very first Rider to modern audiences. Thus, was born Kamen Rider: The First, a theatrical remake of the first series.

As per the series, motorcyclist and college student Takeshi Hongo is nabbed by agents of the evil Shocker organization. Without Prof. Midorikawa to save him this time, Hongo is inducted into Shocker's ranks as a Super Soldier called "Hopper." He is instructed to kill all witnesses to Shocker's activities; however, after an encounter with a young woman and her fiancé, Hongo begins to resist his mental reconditioning. He is then double-crossed by Shocker and eventually leaves the organization; but then, he meets the fiancé, now named Hayato Ichimonji, AKA "Hopper 2"...