I Want My Beloved to Be Happy 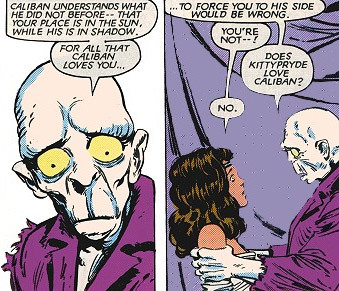 They become friends later.
"Love is when the other person's happiness is more important than your own."
— H. Jackson Brown, Jr.
Advertisement:

A bittersweet trope where Alice loves Bob but realizes that a relationship between them cannot happen, so she decides to put Bob's happiness above her own. Accordingly, she abandons her claim to Bob and encourages him to move on and live his own life, even if that means watching (or even supporting) a relationship between Bob and someone else. The trope is intended to show that Alice is noble and selfless, but it can fall flat if the plot hasn't shown that Alice and Bob had any real connection, or if Alice appears to have ulterior motives (i.e. is still trying to get with Bob by pretending she is letting him go).

If Bob is the one who chooses to do this, this act of sacrifice may (paradoxically) be what causes Alice to notice his interest and/or decide she wants to be with him after all, thus rewarding his virtue. But even if she doesn't, Bob may still contribute to her Happily Ever After, usually in the form of an "If You Ever Do Anything to Hurt Her..." speech directed at her new paramour.

Under The Four Loves, this would be classified as Agape: seeking the other person's good unconditionally, even if there's nothing else in it for you. Also see Romantic False Lead, Act of True Love, Unrequited Love and Insecure Love Interest.

Contrast Murder the Hypotenuse, Green-Eyed Monster, and Love Makes You Evil. Compare/contrast Loved I Not Honor More. Diametric opposite to If I Can't Have You…. Sister Trope to Prized Possession Giveaway (when a character gives another the material possession they treasure the most, knowing that the other character will be happy by receiving it).

In extreme cases, this can be paired with a Death Trope. You Have Been Warned.

Tomoyo doesn't care if Sakura doesn't like her back. All she wants is for Sakura to be happy.

Alternative Title(s): I Just Want My Beloved To Be Happy

Tomoyo doesn't care if Sakura doesn't like her back. All she wants is for Sakura to be happy.