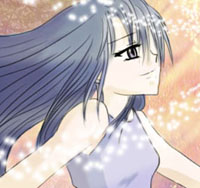 Mina, the mysterious protagonist.
In a World… balanced by essence, Mina is unsealed from her Crystal Prison. Without a memory of her own, she follows the guidance from the oracle and stays protected by the bodyguards from those that fear her dark power. With the guidance and protection from the oracle within her realm, her journey begins.
Description on game's official website

Frozen Essence is a freeware otome visual novel created by VenusEclipse using Ren'Py. The story centers around Mina, an Ill Girl who has been sealed in a giant crystal for 1,000 years, but as she has no memories from before that time, she doesn't know who put her there or why. One day, a strange, hooded figure breaks her out of her icy prison. She wakes up hundreds of days later in a protective realm that she apparently mentally created, cared for by an Oracle and her three bodyguards, Rune, Caius, and Aysel who are responsible for bringing Life essence to Mina in order to keep her awake and alive.

Although Mina must stay confined to the realm she has created for her safety, her curiosity causes her to venture outside the protective field and into a nearby village where a festival is being held. As the story progresses, we learn more about the characters, not only including Mina, the Oracle, and her bodyguards, but also others who she meets at the festival, some of which are trying to kill her. From there, things get worse.

Although the plot narrows according to whose path you choose, the whole story can only be pieced together after reaching 100% completion, or by exploring every man’s path.

The latest version can be found at the creator’s website