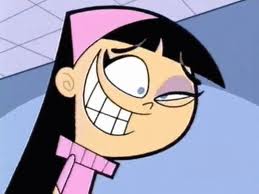 In fiction, a Twitchy Eye is never merely a facial tic — for some reason, a twitch reveals your state of mind.

The prevailing notion seems to be that an eye twitch denotes insanity, which can apply to a permanently mad person with a permanent tic, or an unstable character whose twitch manifests along with their madness. As such, it usually accompanies a Broken Smile, and sometimes overlaps with Mad Eye.

Of course, there are other emotions that give characters a Twitchy Eye, including anything from extreme annoyance, to horror, to caffeine. so much that *twitch twitch* has become a standard sound effect in anime and manga, as well as a standard anime gesture of slowly raising a clenched fist with a twitching eye. Might be the prelude to a Villainous Breakdown or a Heroic BSoD.

Other times it's not a mood, but an action — such as lying — that will bring about the twitch.

In Real Life, a twitching eyelid can be sign of emotional instability, but it's usually a sign of tiredness or severe stress.

Y'know, if she had just a bit more self-control, Mirabel would probably make an EXCELLENT private eye!

Y'know, if she had just a bit more self-control, Mirabel would probably make an EXCELLENT private eye!