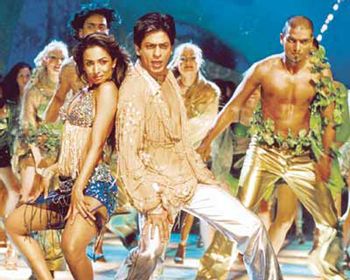 A Bollywood song designed for only one thing: Fanservice. The song in question traditionally had an Item Girl do a dance for either the hero or the villain, but usually did not involve them beyond ogling the girl in question. Also, the song may or may not have anything to do with the plot. A variation on this would be the heroine to do the Item Number, depending on a few factors: She is either a skilled dancer, a new actress in her first movie, the studio could not afford the Item Girl they wanted, or the movie's promotion was centered around the song in question.

Cinema of the Arab world does much the same thing, but usually with a belly dance.