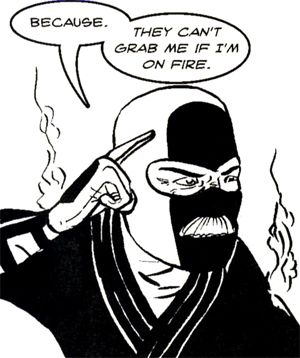 That certainly won't ever be used against him.
"I don't know the scientific explanation, but fire made it good."
— Homer Simpson, The Simpsons
Advertisement:

If one encounters writer's block, there is always the option of setting something on fire. Therefore, the Incendiary Exponent combines the Rule of Cool and a Man on Fire according to the following principle:

The perceived badassery of any given action will increase tenfold if the action is performed while on fire.

The exact reason for this is uncertain. Maybe because being on fire is very, very painful, it's assumed that quite a lot of Heroic Resolve is required to overcome it. Maybe it is due to the association of fire with hot blood. Maybe colours and lights from fire are delightful, especially when moving and when it's dark. Maybe it's just because it looks really damn cool. Whatever it is, the chances are that being set on fire for your big moment will result in a Moment of Awesome.

Doesn't really apply to persons who are normally Wreathed in Flames anyway, like The Human Torch. When the enhanced coolness comes from walking out of a fire, it's Out of the Inferno. See also Flaming Sword, and the entire fire-related index. Just be careful about Infernal Retaliation.

Compare Awesomeness Is Volatile. Also, see Lava Adds Awesome. If fire doesn't feel right but you still have writer's block, try Chandler's Law. If that doesn't work, do both at once and blow something up. Or set a gun on fire.

Fire Bros can set other Fire Bros on fire and throw them at Mario.

Fire Bros can set other Fire Bros on fire and throw them at Mario.