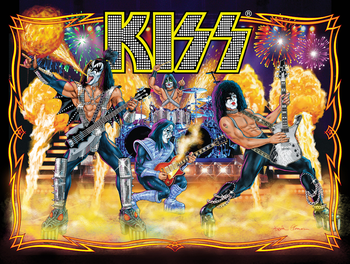 Back to the Stone Age.
Advertisement:

In 2015, a KISS-themed table was released by Stern. Designed by John Borg with hand-drawn art by Kevin O'Connor, the game is a Spiritual Successor to the 1979 Bally table using modern production values.

Once again, there isn't too much in term of plot, and the goal is to rock out with Gene, Paul, Eric, and Tommy in a fire-and-smoke-filled cavalcade. While Gene Simmons and Paul Stanley give instructions, play through ten songs, including "Hotter Than Hell," "Black Diamond," and "Lick It Up," and complete the associated location for each one. Collect the band's instruments, join the KISS Army, then use the Backstage Pass for a random reward. Complete the Starchild's playfield to activate the Love Gun, or lock three balls and have the Demon spit them back at you. Good players will get to play KISS Army Multiball, but only the best will complete the band's demanding requirements and get the Rock City Super Jackpot.