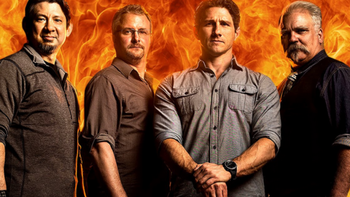 Forged In Fire is a reality show about the art of bladesmithing, originally hosted by Wil Willis (Seasons 1-7) and currently hosted by Grady Powell (Season 8 to present). In each episode, four smiths compete to win $10,000 by forging bladed weapons in a three-round contest.

The first two rounds normally take place in "The Forge," a studio stocked with a wide range of metalworking tools and equipment, sometimes the show will mix it up by having one or both of them take place in an alternative location such as a scrapyard. For the first round, the smiths are given some type of steel and must use it to make a blade in a style of their choosing. The type of steel can vary from a standard block, to a choice of scrap metal objects, to material salvaged from a junked car or lawnmower, to rejected blades from previous episodes. The host issues a set of specifications for the blade length, and sometimes gives an extra challenge (add things like serrations or a fuller, use a specific technique, and so on). The bladesmiths are given three hours (four if the extra challenge is particularly difficult) to forge their blades and deal with anything goes wrong. Medics are on hand to treat any injuries or other health problems (usually caused by the intense heat) and may disqualify any smiths they feel are unable to continue safely.

When the time is up, they present their blades to a panel of three judges who evaluate the craftsmanship/quality and point out any flaws or defects. The host does not take part in the judging, but sometimes offers insights based on their military service in order to give the judges a different perspective on the blades. The person who handed in the worst blade (or a blade which didn't meet the specifications) is eliminated from the competition, and must turn in his/her weapon and leave the Forge.

In the second round, the three remaining smiths are given another three hours (reduced to two in later seasons) to turn their blades into fully functional weapons, by attaching handles, grinding/sharpening/polishing, and cleaning up any problems noted by the judges in the first round. The judges then put the weapons through tests to gauge properties such as sharpness, durability, and ease of use, by chopping/slashing/stabbing objects which include logs, ropes, animal carcasses, and steel car doors. As before, the smith whose weapon is judged the least satisfactory has to turn it in and leave.

For the final round, the two remaining smiths are shown a historically significant weapon and have five days (reduced to four in later seasons) to create their own versions of it, working at their home forges. They then bring their weapons back to the Forge for testing against objects and conditions resembling the situations in which they were typically used. The loser turns in his weapon, and the winner is named as the day's champion and receives the $10,000 prize.

The show is currently in its ninth season, which premiered in March 2022.

2018 also launched a spin-off show, Forged in Fire: Knife or Death, which is about wielding blades rather than making them. In this show, contestants pit themselves and a single blade against two courses of targets which must be cut, chopped through or destroyed with the weapon. The show test both the weapons' strength and durability as well as the contestants' skill, strength and endurance. The winner of each episode advances to the season finale, with a $20,000 cash prize at stake.

A second spin-off, Forged in Fire: Beat the Judges, premiered in 2020. On each episode, three previous Forged in Fire champions return to compete against each other through two rounds for a chance to face off against either Neilson, Baker, or Abbott in a head-to-head forging contest, with another $10,000 at stake.

open/close all folders
Forged in Fire
Knife or Death