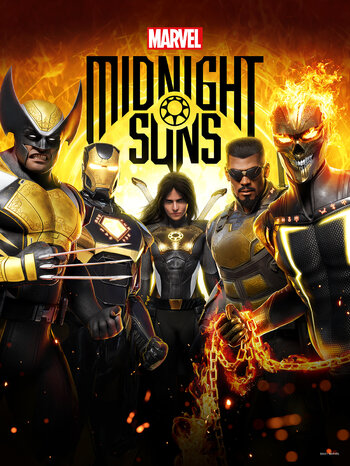 Marvel's Midnight Suns is a tactical RPG based on the Marvel Comics property of the same-ish name, developed by Firaxis Games in collaboration with Marvel Games. It was released on PlayStation 4, PlayStation 5, Nintendo Switch, Microsoft Windows, Xbox One, and Xbox Series X|S on December 2, 2022.

Loosely based on the Rise of the Midnight Sons comics storyline, you play as the Hunter, a superhero from the 1600s and the child of Lillith, Mother of All Demons. When Lilith is awakened in the present day by the villainous organization Hydra, the Hunter is resurrected by Dr. Strange. They team up with some of the Marvel Universe's heaviest hitters to help take Lilith down once and for all. Midnight Suns is notable for being one of the few Marvel video games to focus on its supernatural side, as the titular group is a Supernatural Team formed to face magical threats, while the other superheroes are just there to provide backup (and often admit to being out of their element).

In addition to the Hunter, the other playable characters are Iron Man, Spider-Man, Captain America, Wolverine, Doctor Strange, Captain Marvel, Blade, Ghost Rider (Robbie Reyes), Magik, Nico Minoru, Scarlet Witch, and The Hulk. Deadpool is available as a DLC character, and Venom, Morbius, and Storm are set to be added as DLC in the future.

A series of animated prequel shorts began airing on the game's YouTube channel in October 2022. The first, "The Salem Sisters", can be viewed here

Marvel released a comic series, Midnight Suns (2022), to accompany the game. This version uses the same title and many of the same characters as the game.

Nico can really let her feelings out when Wanda is rescued and the Hunter calls the Suns a family.

Example of:
Tears of Joy

Nico can really let her feelings out when Wanda is rescued and the Hunter calls the Suns a family.