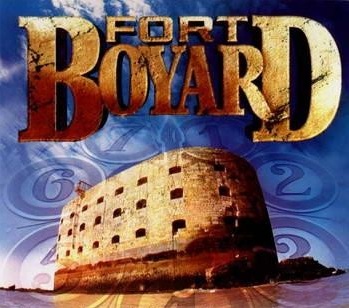 Fort Boyard is a summer Game Show, originating in France in 1990 and, so far, running for over 30 seasons there. Several foreign versions have been made — Swedish, Dutch, Finnish, Russian, Algerian, along with a joint venture between the United States and the UK featuring teenagers. All the shows take place on Fort Boyard, a 19th century fortress off La Rochelle on the West Atlantic Ocean coast of France.

Depending on the version, four to six contestants take part in physical and mental challenges under time limits to firstly acquire keys to a treasure room and then to acquire clues to a password that, inside the treasure room, will release a load of coins. All against some sort of countdown clock. The French version features teams of celebrities since the mid-nineties, and all the money that they win goes to charity associations that they support. Some non-French versions have contestants playing to win money for themselves.

In the UK version, these challenges were set by Boyard, master of the fort (played by Leslie Grantham in the first UK version). Whether or not he's evil seems to vary according to the version.

In the current French version, the challenges are set by the Père Fouras, an old, bald intellectual, and the show itself is hosted by Olivier Minne since 2003 (it was hosted by Patrice Laffont from 1990 to 1999 and Jean-Pierre Castaldi in 2000-2002). Three dwarves, "Passe-Partout", "Passe-Temps" and "Passe-Muraille" (since 2004), are frequently present to assist the master of the fort by escorting the team, bringing information about the next challenge, and holding on to what the team's won. The actor playing "Passe-Temps" was fired in 2010, reducing the numbers of dwarves to two again like it was the case during the show's early years.

When Channel 4 wanted to make a UK version, the filming schedule of the French original meant they couldn't use the fort, so they went and built The Crystal Maze instead. Many years later there was indeed a British series of Fort Boyard, but by that time it was viewed as a poor man's The Crystal Maze.

The show had a short-lived spinoff, Boyard Land, which lasted two seasons in 2019 and 2020.