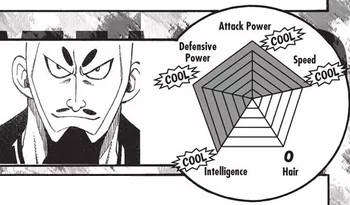 Hair is a Dump Stat.
"A human being should be able to change a diaper, plan an invasion, butcher a hog, conn a ship, design a building, write a sonnet, balance accounts, build a wall, set a bone, comfort the dying, take orders, give orders, cooperate, act alone, solve equations, analyse a new problem, pitch manure, program a computer, cook a tasty meal, fight efficiently, die gallantly. Specialization is for insects."
— Robert A. Heinlein
Advertisement:

What if you could be, not merely average, but world-class...at EVERYTHING?

The physicality of both a Mighty Glacier and Stone Wall without the slowness, the speed of a Fragile Speedster without the fragility, the diverse magic of a Squishy Wizard without the squish, the stopping power of a Glass Cannon but with Nigh-Invulnerability. All the pros with next to none of the cons, that right there is a Master of All; a person or thing with near-deific levels of skill and power.

While your average Jack-of-All-Stats and/or Trades tend to range from bad to good at either every or any skill, the Master of All Trades is almost never outclassed, usually only by someone with a Crippling Overspecialization towards that one stat or skill. They may also be Purposely Overpowered, especially if they're an SNK Boss or good in the One Stat to Rule Them All.

Compare Lightning Bruiser and The Ace. Master of None is the obvious contrast. Almost always guaranteed to fall under God Tier in the hierarchy of Character Tiers.

The Emperor's Coven is a master at all types of magic.

The Emperor's Coven is a master at all types of magic.