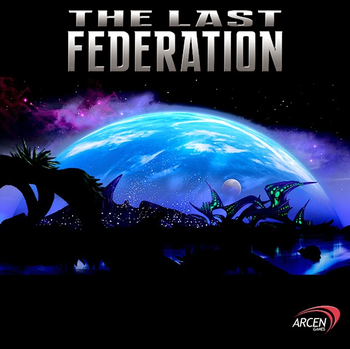 You are the last Hydral. The Hydrals were the tyrants of the solar system by dint of achieving space flight before anyone else and shooting down everyone who tried to join them. Their empire doesn't last: the Evucks dropped a Depopulation Bomb, and the Acutians attached rockets to a moon and crashed it into the Hydral homeworld, completely destroying it. The player, having broken with his people, was away from the homeworld and crash landed on one of the other populated worlds. Biding his time, the last Hydral waits in captivity until the species reaches spaceflight, at which point he steals their unique flagship and escapes.
Advertisement:

The Last Federation is a mixture of Turn-Based Strategy and Real-Time Strategy by Arcen Games, that has a distant sequel in Stars Beyond Reach.

The player's ultimate goal is to unite the (surviving) species under a federation. While you have no direct control over the eight candidates, you can influence their construction, research and and diplomatic agenda, and also directly involve yourself with their space battles. Combat is turn-based, with everyone's actions resolving at the same time. The player can move and attack, or spend a turn to use a special ability.

Two expansions, Betrayed Hope and Lost Technologies, in addition to the usual expansion content, add entirely new game modes that toy with the base game's "peace at any cost" theme.

Tropes that appear in the game: