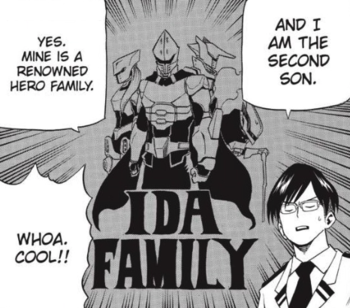 Cabbage: Listen, my son. The men of our family have been legendary heroes for generations.
Cucumber: ...but you're not a—
Cabbage: SO IT SKIPS A GENERATION HERE AND THERE!
— Cucumber Quest
Advertisement:

Got a good Ancestral Weapon? Got a cherished family recipe for whoop-ass? There's only one thing to make this heroic picture complete: at least one sword-wielding, name-taking hero in your family tree. Maybe more. No wonder you've got a thing about saving people—it's In the Blood.

Maybe not as shiny as full-on Divine Parentage,note Then again, many heroes did have Divine Parentage back in the day, so this could be a two-for-one special. but it certainly explains that Orphan's Plot Trinket.

Makes a great surprise if there's a Luke, I Am Your Father moment in store.

In short, a character is a descendant of a famous hero, regardless of if he knows it or not, or how strong the blood is. Compare Tell Me About My Father!, where the character loves to think about his dead/absentee parents as heroes, regardless of the truth. Compare Single Line of Descent where apparently there's only one person per generation who carries the gene.

Almost guaranteed to inherit an Ancestral Weapon at some point.

Subtrope of Famous Ancestor and In the Blood. Generally found or at least claimed among those with Blue Blood, although they may not initially know about it. Master-Apprentice Chain is a similar concept without necessarily involving blood relation.