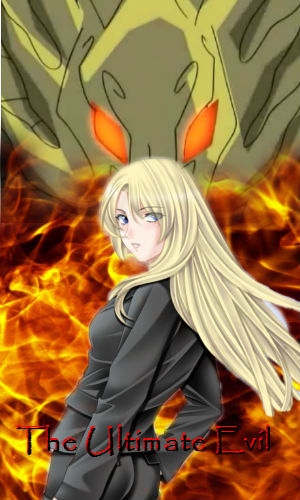 The original cover of the first part. Click here

to see the current cover.
Advertisement:

is a Jackie Chan Adventures fanfiction by DONOVAN94.

The story is an Alternate Universe Fic that focuses on the first two seasons of the show. A young woman named Valerie Payne is hired by the Chans as a shop assistant during the first season's Talisman hunt. She quickly becomes mixed up in the world of magic and joins the Chan Clan as an honorary family member. While adventuring with them, she gains the attention of Shendu due to being unexpectedly connected both to his past and himself. Soon Shendu adds to his goals one more: making Valerie his.

The story is completed, and it has an ongoing sequel named The Stronger Evil

that covers the events from the ending of the third season up to the final season.

Official Description of The Ultimate Evil:

A Chinese proverb once said: "Love is blind, and greed insatiable". So too was Shendu: in his quest for world domination he found a woman that he wanted with a blind lust and had a unquenchable fascination with her connection to his past. Valerie, a woman working for the Chans, is unaware of the demon that will do anything to have her, nor of the growing connection between them…

Official Description of The Stronger Evil:

A proverb says: "He who pursues revenge should dig two graves." Shendu thirsts for vengeance on his enemies, even if he is undermined by his yearning for one woman: Valerie Payne, a woman torn by her need for freedom against the demon who loves her. When his past clashes with her future, they will have no choice but to come together to face a threat they never thought could exist.

Be careful of spoilers listed under the sequel.