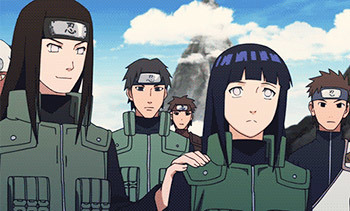 Unless Prophet Eyes are common in the gene pool, those two are probably related.
"You have your mother's/father's eyes."
— Many characters in many works
Advertisement:

In media, characters frequently have a Strong Family Resemblance to other members of their family, often down to a Hereditary Hairstyle but sometimes creators go for a more subtle hint of relation. Since Eyes Never Lie, what better thing to do that than by giving the whole family very distinctive peepers?

Frequently, people who knew the parent in question will remark that the character has their mother's/father's eyes. In some cases, people can figure out who the family is from their eyes alone! Oddly, this occurs as often (if not more so) with common eye colors as it does with Technicolor Eyes; this is usually justified by the eyes exhibiting some kind of expression or intensity that the parent shared.

Avatar: The Last Airbender / The Legend of Korra