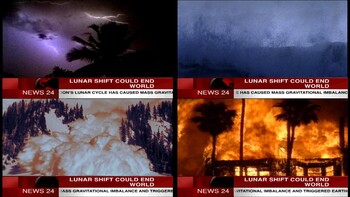 Not much good stuff on the news these days, is there?
"More than sixty volcanoes are erupting worldwide, and downtown Honolulu is under six inches of snow. Scientists continue to devise theories connecting these unprecedented natural disasters with the planetary alignment which- [SMPTE color bars]"
— Transformers: Prime
Advertisement:

A megatsunami is surging through New York, lightning storms are striking Paris, tornadoes are ripping London to shreds, water spouts are on Lake Erie, earthquakes have knocked down half of Tokyo, Moscow is on fire, the ISS can't see Africa through the hurricanes, and it's snowing in Rio.

In any case, a chain of various simultaneous or close-together natural disasters is suddenly wreaking havoc around the world, regardless of the cause or origin of the calamity. A montage of news footage often shows the different flavors of disaster around the world in short order while reporting on them.

Can be a natural form of Disaster Dominoes, if one disaster causes another, which causes the next one, etc.

Note that the disaster chain doesn't have to be caused by Gaia's Vengeance (although that is one possible cause) — on the contrary, the Natural Disaster Cascade can sometimes indicate the planet is sick or dying. The disaster chain can potentially be detrimental for just humanity or for all the planet's biosphere. Villains utilizing a Weather-Control Machine will probably unleash this on the world or at least threaten to do so in order to achieve their goals. Other potential causes are Global Warming, Weather Manipulation on a grander scale than standard, another Doomsday Device, or Terraforming gone wrong.

A common staple of Disaster Movies. These are often treated as Signs of the End Times, and may very well be that in truth. If it progresses far enough, it can cause Regional Redecoration that's often portrayed from space. This trope seems to be getting slightly more popular in recent years as concern about Global Warming is increasing.

This trope is rarely, if ever, a good thing for the heroes in a work, and it can be anywhere from a Class 0 to a Class X on the Apocalypse How scale. The heroes' goal is almost always to remedy whatever is causing the natural disasters (if it's not already too late for that).

Compare Hostile Weather, which is when harsh weather of one or more kinds that might be entirely normative drives the characters and/or plot.