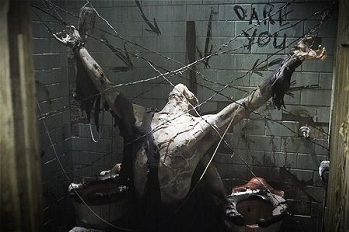 Occupado!
"Rule #3: Beware of Bathrooms. Don't let them catch you with your pants down."
— Columbus, Zombieland
Advertisement:

In some works of modern media, bathrooms (especially public toilets) are excellent places for a terrifying scene to occur. Many people feel vulnerable as they take care of intimate matters while partially-undressed. Since they often do this alone, it may stir dread about isolation. This trope plays on latent anxieties, Paranoia Fuel, and general squick many people have about bathrooms.

Common scenarios include (but not limited to) the presence of an unknown malicious entity, often a Vengeful Ghost, the discovery of a dead body, finding out that you are not what you appear to be, violent scenes involving the murder of a character, or sickening sights. Whatever it is, it's unnerving and unexpected, and sometimes involves a Jump Scare.

Scenery Gorn is part of the reason for this. There's something evocative about white porcelain splattered with blood, water filled with blood, and broken mirrors. These scenes often take place in a Disgusting Public Toilet for similar reasons.

A Super-Trope to Deadly Bath, "Psycho" Shower Murder Parody and Mirror Scare. May involve The Can Kicked Him if a toilet is the means for a violent death.

May overlap with Camping a Crapper (getting attacked in a bathroom). Only examples that are Played for Horror beyond the usual suspense of a Chase Scene would count here. Compare also Searching the Stalls. Compare with Bathhouse Blitz where the victim is being stalked but the instigator is a mundane threat. See also Swirlie and Trans Tribulations, for bathrooms as a place of distress but not necessarily horror.

Not to be confused with Toilet Humour, though the two may overlap during a moment of Mood Whiplash.