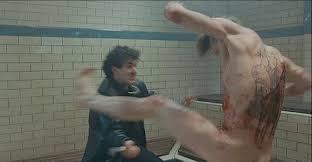 In ages past, bathhouses were a popular gathering spot. People could relax and shoot the breeze while soaking and getting clean. Because it was a shared luxury amenity, modesty was put aside in favor of cleanliness and community. The increased difficulty of sneaking in weapons makes this environment feel safer, so law-abiding citizens and criminals alike let down their guards, creating a perfect opportunity to strike. Examples of Bathhouse Blitz are found primarily in Period Piece media, but may appear in modern works, particularly in works from Eastern cultures. This trope features a traditional bathhouse/ shared sauna, a requirement that all participants disarm and disrobe, and often the instigator will have to infiltrate the environment to find their target. This attempt can either be completely successful as a stealth operation or lead to an all out brawl. Either way, it ends in an Interrupted Bath for the target and depending on the motive of the instigator, it may also be a Deadly Bath.

For Bathhouse Blitz to be in play at least one party in the ensuing altercation must enter the bathhouse/ sauna with the intent of attacking, kidnapping, or killing the other party. Contrast with Bathroom Brawl which is usually a spontaneous attack in the modern version of toilet spaces where all participants are fully clothed and possibly armed. Contrast with Camping a Crapper which is a premeditated attack where the instigator simply waits for nature to call for the victim. Contrast with Toilet Horror where the aggressor is driven by a supernatural force or single-minded drive to kill.