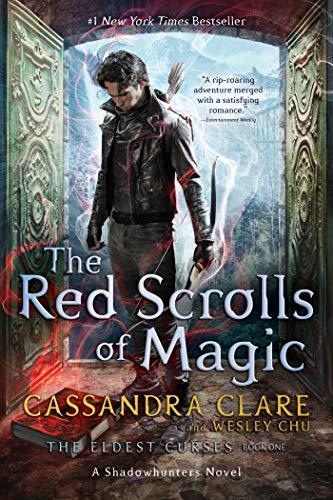 The Eldest Curses is a Young Adult, Urban Fantasy trilogy written by Cassandra Clare and Wesley Chu. It focuses on Magnus and Alec and is a part of The Shadowhunter Chronicles.

The first book in the series follows Alec and Magnus on their trip to Europe. They are having a good time until Tessa Gray informs them that the Crimson Hand, a demon worshiping cult, has been killing people and that it is rumored that Magnus is their leader. Chronologically, the book is an Interquel of The Mortal Instruments series, taking place between City of Glass and City of Fallen Angels.

In the second book, Magnus and Alec have just adopted Max when they suddenly have to travel to Shanghai to save Ragnor Fell and prevent the Book of the White from falling into the wrong hands. Luckily Clary, Jace, Isabelle and Simon are there to help them. Chronologically, the book takes place during the five-year gap between The Mortal Instruments and The Dark Artifices series.

Alternative Title(s): The Lost Book Of The White, The Red Scrolls Of Magic