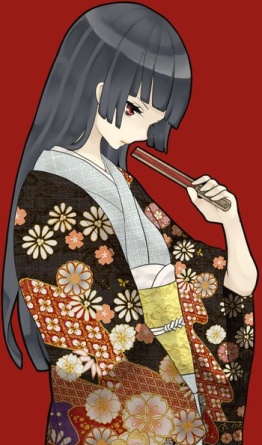 In contemporary Japanese settings, the kimono is often shorthand for "this character appreciates the traditional Good Old Ways." Even people who wouldn't normally even think of abandoning the comfort of Western wear, will go out of their way to wear a fancy kimono for formal celebrations and events. For more information about the kimono, see the useful notes. For specifically kimono-flavoured fanservice, both sexual and not so, see Kimono Fanservice.

Kimono is a likely wear-of-choice for Yamato Nadeshiko, and will underline these qualities Up to Eleven. A Geisha will never work out of kimono. An elderly character wearing a kimono will likely represent the traditional ways, demanding respect as the iron-fisted head of their family. Sometimes the whole family is dressed this way, and might seem stuck in the Middle Ages when it comes to values.

If the fianceé or would-be-so is shown in a kimono, expect her to be an upper-class maiden brought up in "Kyoto style", i.e. the old-fashioned way. In short, a character wearing a kimono daily means that they will most likely follow the expected ideal of a Japanese person of their age, sex and position. The exception is a working-age male daily wearer. This reads as somewhat of a rebel, as he most likely won't be a white-collar salaryman. Yet another character type seen wearing kimonos is certain hostesses — often a background hostess coupled with a dress-wearing one. In their case, the kimono belongs to their shtick of more grown-up, discreet charms and Yamato Nadeshiko or even geisha-like aesthetics.

In modern Japan, the skill of dressing in a kimono and carrying it is largely limited to dancers, geisha and such, and aficionados. As well, professional sumo wrestlers are required to wear traditional Japanese dress whenever they are in public, with rank indicated by the elaborateness of the clothing. Being able to dress oneself in a kimono is oh-so-WOW, while yukata-wearing skill is more like a citizen responsibility. Other stereotypical kimono wearers are artistic types, mainly traditional artisans, painters, novelists and such, for whom it confers an air of respectability and grounding in tradition, which more Westernized and bohemian types often lack. Kimono are also not cheap by any means. Thus, daily kimono wearer characters have a certain aura of elite in the Japanese mind.

Note that simply wearing yukata does not qualify a character to be traditional in kimono — it's considered a different type of garment altogether in Japan, and has different connotations. Similarly on the opposite end, wearing an uchikake, i.e. a loose, unfastened outer kimono on top of the normal kimono, in normal conditions (outside weddings) multiplies all the traditionalness, class, and wealth indications the kimono itself gives to a character.