Anime / Yuki Yuna is a Hero 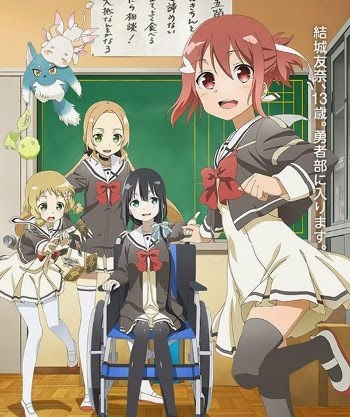 Welcome to the Hero Club. Everything will be fun from now on! note From right to left: Yuna Yuki, Mimori Togo, Fu and Itsuki Inubouzaki. Not pictured: Karin Miyoshi
"Give a good greeting."
"Try not to give up."
"Sleep well, eat well."
"If you're troubled, talk to someone!"
"You're likely to succeed if you try."
—The Five Tenets of the Sanshu Middle School Hero Club
Advertisement:

Yuki Yuna is a Hero, a.k.a. YuYuYu, is a Magical Girl Genre Deconstruction series which aired during the Fall 2014 Anime season. It was developed by Studio Gokumi and main writer Takahiro, the same guy who wrote Akame ga Kill!, from Minato Soft, the same company who wrote Majikoi! Love Me Seriously!

In the past, most of humanity was destroyed by a virus, with the Japanese island of Shikoku surviving thanks to the appearance of a divine tree called the Shinju, asking only for worship in return. Three hundred years later, Shikoku has prospered under the Shinju's guidance, allowing the people to live happy, ordinary lives. One such girl is Yuna Yuki, your everyday Ordinary Middle School Student who enjoys being with her friends and eating snacks. Yuna, her wheelchair-using best friend Mimori Togo, Fu Inubozaki and Fu's younger sister Itsuki all make up the Hero Club, a special school club formed to do good deeds and to help people. At least, that's what they were told.

Everything changes one day when the girls' cell phones abruptly start ringing in class. Before they can react to the "Forestize Warning" alert that their cell phone screens display, everyone and everything around them goes completely motionless, followed by the sky splitting open and the world being overwritten by an unearthly forest. Fu has to give the rest of the Hero Club the quick rundown on what's going on before the first Vertex attacks. As it turns out, the Hero Club is quite literal, and the girls have to fight to save the world.

Several other aspects of the universe, collectively called the Yuusha De Aru franchise, have been introduced:

Compare Puella Magi Madoka Magica, a similarly dark take on the Magical Girl genre which has been argued by some to be the show's primary inspiration. Contrast Lyrical Nanoha and Symphogear, works which themselves are dramatic at times but ultimately play the genre completely straight.

Season 1 was licensed by Pony Canyon USA for release in America before the entire series was rescued by Sentai Filmworks.

A third season, titled Yuki Yuna is a Hero: The Great Full Bloom Chapter, was announced on August 1, 2020 at an event celebrating the franchise's fifth anniversary. It aired in the Fall 2021 Season, serving as an adaptation of Kusunoki Mebuki is a Hero and Nogi Wakaba is a Hero, while also acting as a midquel for the events of the Hero Chapter, eventually filling in the events of Hero Chapter with bonus scenes.