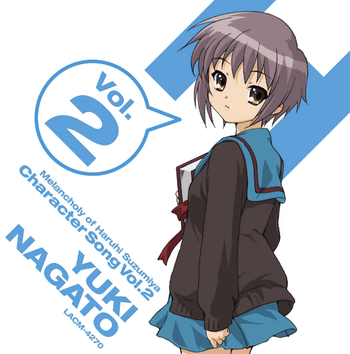 A song specific in content and tone to a character from an anime, often sung by the character's voice performer—usually on a soundtrack CD.

The animation houses which produce anime are nothing if not masters of cross-marketing and cross-promotion. One means by which a series is promoted and supported in the Japanese media marketplace is (as is sometimes the case in the United States) the original soundtrack CD. In the early days of this practice, such CDs usually contained nothing more than the program's opening and closing themes, as well as most or all of the incidental music heard in the show. Eventually, though, the producers of such discs began to take advantage of the fact that most Japanese voice performers are also professional singers, often of the "idol" variety which drives the Japanese pop music market. They began to write songs that typified—and sometimes explored more deeply—the characters.

Thus was born the "image song", a uniquely Japanese variety of All There in the Manual. While a viewer can enjoy and understand a series without ever hearing the soundtrack, those that do listen to the music often receive a "bonus" in the form of a deeper understanding of the nature of the characters. Occasionally the image song makes its way back to the series, where it may appear as a character's theme music, or to punctuate a sequence which features them, or as the song for a Special Edition Title sequence. As time has gone on, this has become more frequent, to the point where in some shows the image songs almost (but not quite) supplant the traditional soundtrack releases entirely. And in some cases, the show's theme song is treated as an image song — usually sung by the most important female member of the cast, but also remade any number of times by other voice performers from the show.

Since the 2010s, image songs have fallen out of favor with seasonal anime, but are still common with franchise-driven series, especially Idol Genre shows. This is because seasonal anime may not last long enough or have the dedicated resources to produce singles on a consistent basis, in contrast to ongoing franchises. Additionally, idol-based shows are already dedicated to music and have a built-in audience thanks to idol fan culture. As a result, most of the resources are invested there instead.

The image song differs from the leitmotif in that it primarily exists outside of the show, whereas a leitmotif is created specifically for use in the show to represent a character or idea. In Western musicals, the Cut Song has a similar function. "I Am" Song and "I Want" Song are similar but occur in the show.

So Much More to Me

So Much More to Me