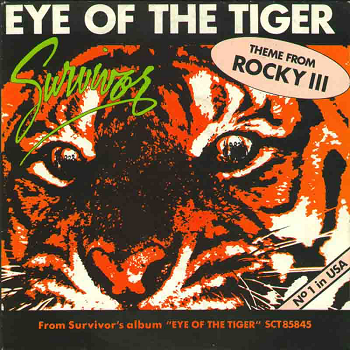 Soundtracks are one of the most memorable things about a work. Often, a work will have one (or many) tunes that, when you hear them, just immediately make you remember the work in question. And then there are those tracks that you associate so much with the work that the absence of it feels like Early Installment Weirdness.

This could be related to many things. For instance, a particular theme could be associated with an Iconic Sequel Character (such as the theme of Rohan from the The Lord of the Rings trilogy), it could result from a particular composer just penning something magnificent that so happened to come later in the series, or it could be because one particular track just struck a chord with audiences. Whatever the case, if you hear a song from a score and it makes you instantly think of the series as a whole, and it doesn't appear until after the first installment, you have yourself an Iconic Sequel Song.

As mentioned above, related to Iconic Sequel Character, where it's the character him/her/itself that appears late. See also Bootstrapped Theme, which is when a particular song unofficially becomes the main theme of a particular franchise, as many of those listed below are bootstrapped themes for their franchises.

open/close all folders
Anime
Films — Animated
Advertisement:
Films — Live-Action
Live-Action TV
Professional Wrestling
Usually, it takes a while for a professional wrestler to find a theme that's truly iconic. In most major promotions, wrestlers usually are given generic instrumental stock music as they rise up the card. Once they become a big deal, then they probably get a more distinctive theme song. You can tell that a wrestler has found their definitive theme if they decide to keep it for the rest of their career:
Video Games
Web Animation