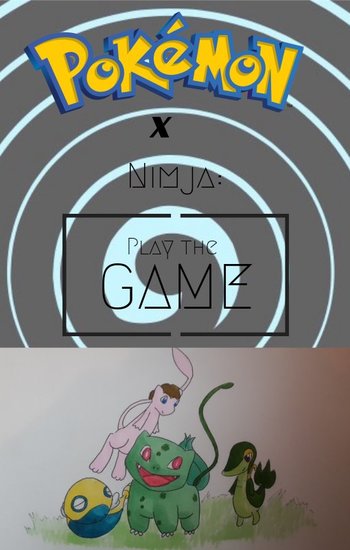 The promo poster and main cast. From left to right: Slang, Nimja, OGiNiM, and HyDrO.
You've heard his files. You've read his stories. Now... you're about to be dropped into his world. And it's quite unusual.
Are you ready?
— Tagline
Advertisement:

, often referred to as simply Play the Game or PTG, is a Pokémon fanfiction based on "the files, stories, and nerdiness" of the Dutch hypnotist YouTuber Nimja, whose channel can be found here

. The plot involves Nimja and his two biggest fans, the plucky Genki Guy OGiNiM and the snarky, intelligent, seemingly emotionless HyDrO, as they are transformed into Pokémon on August 19, 2020, the fictionalized day that Nimja receives 100,000 subscribers. note  The actual day of Nimja receiving that many subscribers was August 29, 2018, and the actual date of him showing off the Silver Play Button was November 4th, 2018 (though he did indeed show it at the beginning of a livestream. They are soon sent on a portal-hopping quest through multiple dimensions as they, along with a panicky Dunsparce named Slang, attempt to defeat an evil Dutch hypnotist by the name of HyPN0se, who plots on taking down not only the hypnotists, but everyone who believes hypnosis is real. The fanfic is told in flashback through file "recordings", usually done by Nimja, although at some points OGiNiM or HyDrO will break in.

It was announced by the author that a web series based on the fanfic would be made. Currently, the cast is as follows:

The actors/actresses for HyPN0se, Aegis, and Crowe have yet to be revealed. Further details regarding the web series have yet to be released; however, the author has teased a trailer, and the opening theme (an English cover of "Question") has been released and can be found on Goldenheart's YouTube channel.
Advertisement:

Play the Game contains examples of:

Crowe: Oh! By the way, did you know that I breed horses?
Hades: Pardon? You breed horses?
Crowe: Ja! Paarden! See, you're getting the hang of this language already.
Hades (evidently confused) I'm sorry, Crowe. I have no idea what you're talking about. So... you don't breed horses?
Crowe: No, no, no; I do breed horses; it's just that—''
Hades: But... you just said you bred some strange animals called yapardon. note  "Ja, paarden," meaning "yes, horses" in Dutch, is pronounced like "yapardon."
For Something Completely Different.”
Let yourself drift and drop so deep
Before you know it, you’ll be asleep
It’s too much to resist
So don’t betray
What must you do?
You must obey...
How did I ever know all about you anyway?
RECORDING: END
WAKE