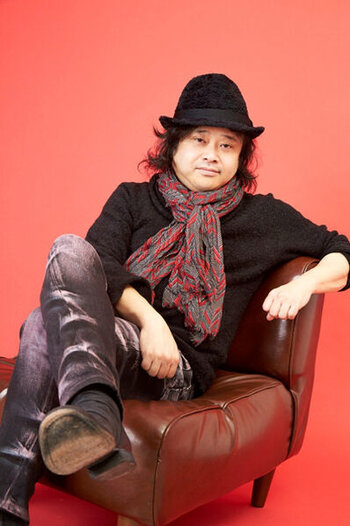 He's quite prolific according to ANN, with fans nicknaming him as "The King of Braves/Yuusha-Oh" for his accomplishment in earning not just one, but two leading roles within the Brave Series franchise; namely, Might Senpuuji from The Brave Express Might Gaine, and, more famously, Gai Shishioh of The King of Braves GaoGaiGar.

For additional heroic bonuses, he is also the man behind the character who wields the Triforce of COURAGE himself—Adult Link from The Legend of Zelda: Ocarina of Time, and Fierce Deity Link of The Legend of Zelda: Majora's Mask—accompanied by him also being the first official voice actor for Three, the most recognizable hero of the Dragon Quest series.

However, it was Hiyama's cold and cool-headed characters that gave him his breakthrough to begin with. Namely, Hiei of YuYu Hakusho. While he is capable of doing calculating, and psychopathic characters, his forte resides in Hot-Blooded characters such as Viral from Tengen Toppa Gurren Lagann.

Best buds with Toshiyuki Morikawa, and close friends with Hikaru Midorikawa, Ryotaro Okiayu, and his YYH castmates; this includes Megumi Hayashibara, as hinted in her biography manga, Megumi-Toon

Along with Morikawa, the two of them were involved with the birth of Show Hayami's Super Stylish Doctors Story. Post 2011 Earthquake

, Hiyama is also one of the core members of the voice-actor charity organization, “Seiendan (Voice Supporters)” led by Kazuhiko Inoue.