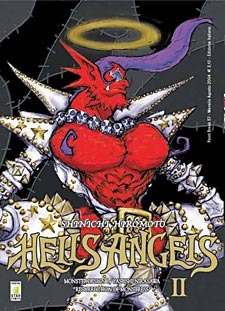 Hell's Angels is a manga

by cult comic artist Shin'ichi Hiromoto, known in Japan (and Italy) for very violent, raunchy and subversive works such as Fortified School. This one retains the crude, sketchy style of his previous manga but is far tamer than those, despite being set in a literally Hellish high school with assorted ghouls and monsters for students.

Young Rinne Amagane is running late for school! Suddenly she notices a cat that has been mistreated and about to be run over by a car; she saves it but is promptly run over by a truck herself. She is late for class... but she finds herself in an academy populated by all sorts of creatures. Apparently she died and went to Hell, but when her classmates discover that she still has her living body, it appears that something strange is going on. So, Rinne not only has to understand how to make friends in this crazy new world and how to go back home to Mom alive, but also to uncover what's going on with human souls and bodies... a mystery that goes right to the beginning of human history, and involves nobody other than Adam and Eve and their sons Cain and Abel. Oh and a not-quite-almighty God makes his appearance too.

Among the other characters, there's the loud and boisterous principal Hellvis (no guesses as who he is inspired by), handsome student council president Ryu Kutou and Steela/Stealer, a taciturn and gloomy girl in Rinne's class who seems to be equally feared and despised by everybody.

The manga was originally serialized in 3 tankoubon by Shueisha in 2002, and six years later Mad House adapted it into an anime film

Discotek Media licensed the movie with the dub handled by Team Four Star (of Dragon Ball Z Abridged and Hellsing Ultimate Abridged fame) - both have made sure to note that it is not a Gag Dub.

Not to be confused with the infamous motorcycle gang. Or with the 1930 movie.

The manga and resulting anime provide the following tropes: