Manga / Fist of the Blue Sky 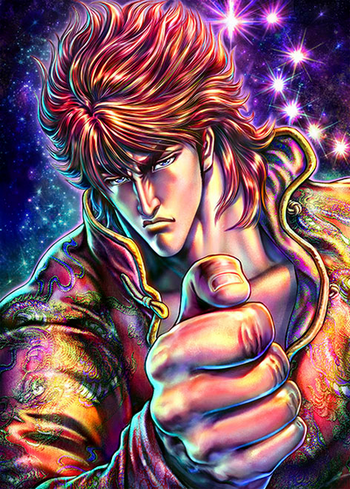 If you got a problem with Hokuto, tell it to me.
Advertisement:

Fist of the Blue Sky (Souten no Ken), is a prequel to Fist of the North Star by Tetsuo Hara, with plot supervision by original writer Buronson, that was published in the Weekly Comic Bunch from its debut issue in 2001 and throughout the magazine's final issue in 2010.

Kasumi Kenshiro was a bumbling, bespectacled literature professor in 1935 Japan, playfully joking around with his students in the Towa Women's College at Tokyo... or so he seemed to be. The unusually large yet mild mannered scholar was invited to a restaurant by an aging Chinese gentleman called Li, who served as a poison taster for the Last Emperor of China. Just as the duo started to reminisce on old times spent amongst The Triads and the Tongs, said-Chinese Emperor's Assassins held Kenshiro at gunpoint, "inviting" him to fulfill his "centuries old duty" as the Emperor's bodyguard, only to have their heads painfully and literally popped open from the inside as he gingerly struck hidden points across their faces with but a single finger.

It turns out that Professor Kasumi is none other than Yan Wang, the "King of Hell," the 62nd successor to Hokuto Shinken and the future uncle of Kenshiro, the Century's End Savior who will bring peace to a world torn apart by nuclear fire many decades later.

Back in 1935, Kasumi Kenshiro returns to Shanghai where he tore a bloody swathe across the Chinese Underworld a year ago by the side of his Peng-You (Friend) Pan Guang-Lin, Dai Lo (Big Brother) of the Ching Bang (Turquoise Brotherhood) Triads; to wipe out the Hong Hua Hui (Red Flower Organization) Triads for murdering his sworn-brother Guang-Lin.

Since his departure to protect Guang-Lin's little sister from bloody feuds of Hokuto-Shinken's legacy, the corrupt Hong Hua Hui, allied with the French Government, has all but wiped out the Ching Bang. The Hong Hua Hui leaders have been rendered grotesque Clock Punk cyborgs after being disfigured by Kenshiro yet living to gloat about it. Kenshiro did warn them to "get out of Shanghai" after literally popping their arms, jaws, spines and legs open. Crime bosses, however, are just too proud to listen.

Soon upon returning to the infamous "Devil City" of the 1930s, not only does Kenshiro have to contend with the warfare of The Triads and the Tongs, he will clash head on with three rival Hokuto branches (each inheriting the names of the Sun, Cao and Liu factions from the Romance of the Three Kingdoms era), jealous with the superiority of the master branch, Hokuto Shinken.

Centuries of hate clash with brotherhood and honor as Shanghai is set to explode with the flames of open war.

Though superficially sharing thematic elements of the Martial Arts from North Star, Blue Sky is first and foremost a Crime Drama with occasional martial arts thrown into its rich, somber, smoky mix.

An anime was first released in in October 2006 and lasted 26 episodes.

In 2017, Fist of the Blue Sky: RE:GENESIS began serialization in Comic Zenon and serves to continue Kenshiro Kasumi's story after the original manga ceased publication in 2010 alongside Weekly Comic Bunch. An anime adaptation of this sequel manga began broadcast in April 2018.