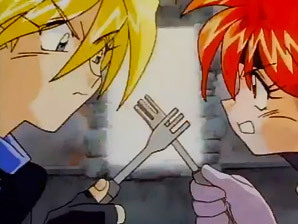 Getting the last meatball?
Serious Business.
"A fight to the death... this spoon shall be our only weapon!"
— Nine the Phantom, BlazBlue: Central Fiction
Advertisement:

Among the many kinds of Improbable Weapon User, the weapon of choice for someone who devotes their life to food may be the tools everyone uses to eat with.

A character who uses a common eating utensil - like a fork, a table knife, or even a spoon - to fight off their enemies may be the mark of a Supreme Chef who's been pushed a little too far, or a Lethal Chef who is as lethal outside of the kitchen as they are inside of it. It may as well be part of the fighting style of the Chef of Iron, whose armaments may also include various cutlery, the Frying Pan of Doom and even food itself. Alternately, if chaos breaks out at the dinner table, a diner may have to get creative with what they have on hand, turning their utensils into an Improvised Weapon.

Normally played for laughs (especially if there's Sword Sparks), but if the chips are down, things can get pretty ugly: this can lead to sickeningly devastating effect in the hands of someone skilled/determined enough.

- this trope is about characters who use dinner forks, butter knives, and the like as personal weaponry.

Subtrope of Improvised Weapon. Compare Frying Pan of Doom, which is about cookware being used as a weapon. Might occur in a Fight for the Last Bite.