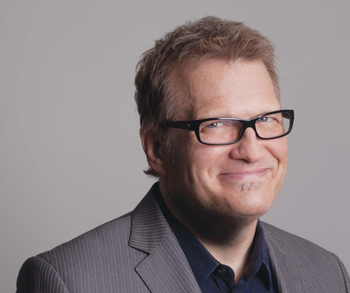 "I just try to get people to laugh - I'm not trying to change the world or anything."
Advertisement:

Drew Allison Carey (born May 23, 1958) is an American actor, comedian, sports executive, game show host and photographer best known as a stand-up comedian, creating and starring in his eponymous series The Drew Carey Show and hosting the first eight seasons of the U.S. version of Whose Line Is It Anyway? (the ones that first aired on ABC and ABC Family).

Carey grew up in the Old Brooklyn neighborhood of Cleveland, Ohio, and attended James Ford Rhodes High School. He went on to college at Kent State University, but was expelled twice for poor academic performance and ultimately left after three years. Subsequently he enlisted in the United State Marine Corps Reserve and served for four years.

His comedy career started in 1986 when he won an open-microphone contest and became Master of Ceremonies at the Cleveland Comedy Club, but he only entered the public eye when he competed in the 1988 Star Search. His stand-up career led to supporting roles on television shows and a small role in the movie Coneheads. In 1995, he premiered in The Drew Carey Show, where he played a fictionalized version of himself, though he grew frustrated with the censors and his inability to employ his usual off-color humor.

Fortunately, he found his next calling in improv television with Whose Line Is It Anyway?, followed by Drew Carey's Green Screen Show and Drew Carey's Improv-A-Ganza. He was also one of the founders of the Improv All-Stars, a group of improv actors that contributed talent to these three shows.

In 2007, Carey began hosting game shows, starting with the short-lived Power of Ten. Carey was subsequently contacted by CBS about replacing Bob Barker as host of The Price Is Right, and he has served as its host since the fall of 2007.

In addition to these roles, Carey has played minor roles across television and film.