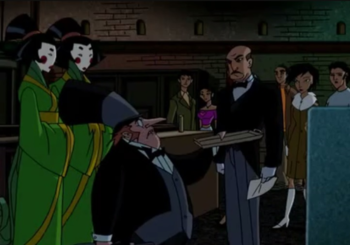 Overdressed, uninvited, unwelcome, and now he's stealing the silverware!
Wanda: But you think you're an intellectual, don't you, ape?
Otto: Apes don't read philosophy.
Wanda: Yes, they do, Otto. They just don't understand it.
— A Fish Called Wanda
Advertisement:

A villain whose air of cultured good breeding serves to enhance their evilness, but they only put it on as an act. A Wicked Cultured villain is genuinely educated, refined, and well-mannered; this guy is crass with mere delusions of class. Perhaps the soft spoken "respectable" businessman never got out of the habit of carrying a switchblade, or the ruthless Rich Bitch social climber keeps can't help but drop cues as to her humble upbringing. Sometimes this can be explained as lack of culture driving the character to villainy, as they can't find acceptance among high society and so decide to say Then Let Me Be Evil.

Compare and contrast with Wicked Cultured, of course, with Lower-Class Lout, and also The Upper Crass; Nouveau Riche characters who are outright evil are usually this trope, but nothing's stopping old money from also fitting it. See also Delusions of Eloquence, Delusions of Local Grandeur, Feigning Intelligence, Inferiority Superiority Complex.