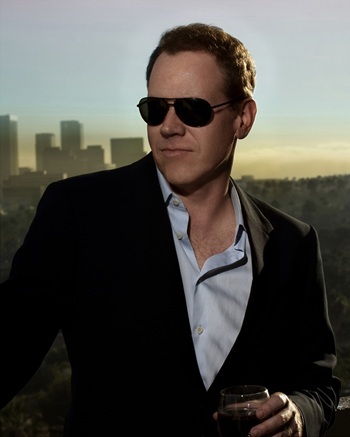 "The whole point of [Ellis's books] is 'Look how terrible these people are. Don't do the things these people do. Don't be like these rich, cool, sexy people.'"
— Rantasmo, on the author

Bret Easton Ellis (born March 7, 1964) is a Los Angeles-born writer who rose to fame in The '80s as one of the "Literary Brat Pack"— and probably the most successful of this group. Works include:

Alongside the controversy of his books, Ellis is a fairly public figure, whose Twitter account and public quotes skirt the edges of misogyny and misanthropy. In short, Ellis is a terrific writer who isn't all right in the head.

on PodcastOne.com, which updates every Monday.

This author's works with their own pages include:

Other works by this author provide examples of: