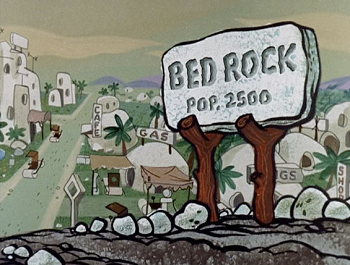 Stonepunk is a sub-genre of the Punk Punk science fiction genre. Stonepunk focuses on pre-technological developments in prehistoric times, its juxtapositions of the modern world with the primitive, and the effects of an early form of 'advanced' technology on society, like The Flintstones, based on primitive materials such as rock, fire, clay, rope, wood and water. Unlike most classic Cyberpunk or Steampunk influenced fiction like Clock Punk, the Stone Age supplies the inspiration behind a modified form of technology based on the materials provided by the natural elements and surrounding environment. Bamboo Technology is common. Depending on the setting, there may be Sufficiently Advanced Bamboo Technology as well. This is the most likely Punk Punk to be Played for Laughs, given its most famous examples.

The defining feature of Stone Punk is the representation of modern inventions and technology but made with primitive materials, making the prehistoric setting a Purely Aesthetic Era. The idea here is that (for instance) road signs and furnishings would not have existed, but as a Rule of Funny and in order to further highlight the primary societal differences they have been included. Having the familiar aspects can make the foreign aspects seem even more foreign to the audience, which is used as a method of storytelling as a sort of constant reminder that "this work is set in a completely different world".

Since the level is set in the Ice Age, all of the architecture in the level is all either naturally occurring or was engineered with animal bones, pelts and rocks.

Since the level is set in the Ice Age, all of the architecture in the level is all either naturally occurring or was engineered with animal bones, pelts and rocks.