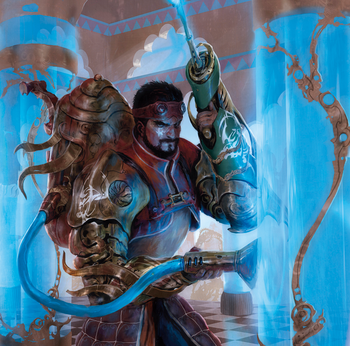 To understand Kaladesh, one must first understand how aether and invention flow together through the great Aether Cycle.
Advertisement:

Steampunk is cool, of course, but when you're creating your own setting you might feel that steam power alone isn't enough to justify such advanced technology. After all, the historical Industrial Revolution failed to produce airship armadas, Humongous Mecha, or legions of steam-powered war robots.

You could just give it a Hand Wave and say it runs on the Rule of Cool, or you could apply some phlebotinum to it. Whether it's an Alternate Universe of our Earth or a Constructed World the alternatives are plentiful, from rare minerals and other substances to something a bit more magical (in which case Gaslight Fantasy and/or Dungeon Punk possibly overlap to some degree). Either way, Single Phlebotinum Limit is likely to apply.