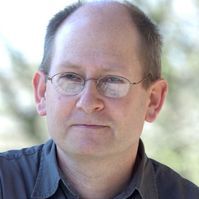 "Sometimes people say that we're living in the future, and time's up for science fiction, but I think that never will be, because science fiction really isn't about the future. It's about change and present-day concerns."
Advertisement:

Stephen Baxter (born 13 November 1957) is a British author known for his hard sci-fi novels. He's most known for his far-future space opera series The Xeelee Sequence, but he also writes a fair amount of Alternate History and more near-future fiction. He has a website here