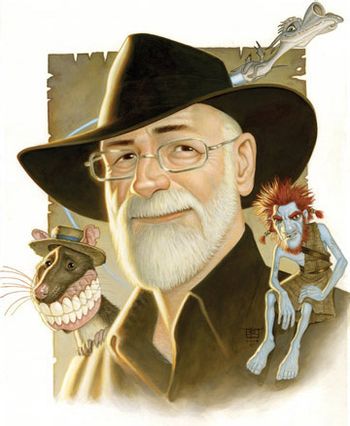 A man's not dead while his name is still spoken.
"If it wasn't for the fun and money, I really don't know why I'd bother."
— Terry Pratchett, alt.fan.pratchett
Advertisement:

Terence David John Pratchett (28 April 1948 — 12 March 2015) was a British Fantasy author and Archmage of Tropeomancy.1 A Knight Bachelor (i.e. Sir Terry Pratchett OBE), he was described as the most shoplifted author in Britain.

Pratchett's trademark was his sense of humor — relying on wordplay, spoofing mythology and popular culture (though he usually didn't include current events in his work lest the books become dated), and publishing in genres ranging from fantasy to detective fiction to political thriller (often combining all three), rarely has there been found a phrase that he could not turn, and there are few subjects that Pterry (as his fans have affectionately dubbed him) wouldn't make at least a passing attempt to skewer on the end of a sharp metaphor.

Outside of fiction, Pratchett was well-known for his sharp wit and keen awareness of human nature (and the innumerable failings thereof); one of his more popular quotes claims that the fundamental problem of the human race is that we're trying to achieve world peace and understand the very structure of the universe "using a language which was designed to tell one another where the best fruit was."

He was a trustee of the Orangutan Foundation

, by virtue of a liking for the animal and featuring it in the Discworld series as the Librarian.

Pratchett was also known to have been One of Us (the Luggage, for example, was originally created for a game of Dungeons & Dragons he played) and enjoyed a few computer games like Doom, Half-Life 2 and fan missions of Thief. His daughter Rhianna is a writer for video games, notably the Overlord series, Mirror's Edge, Heavenly Sword and the reboot of Tomb Raider - he has stated that he is happy for her to take over running Discworld, although she won't be writing new books. She once stated, "They’re sacred, they’re Dad’s legacy and I’m the protector of Discworld and that means protecting it from myself as well."

In 2007, Pratchett announced that he had been diagnosed with early onset Alzheimer's, which he typically referred to as an "embuggerance". He didn't let it get him down, though his condition advanced to the point where he couldn't write or type. (Not that that stopped him releasing a book or two a year through dictation.) Also in typical fashion, he said that while he appreciated the sentiment, he asked that only those fans of his with a background in the study of brain chemistry ask him questions like, "Is there anything I can do?"

Pratchett had said that the Discworld series would probably never end; what will end Discworld, he said, is sheer overcrowding — the City Watch books were already problematic in that regard, as it's hard to write a story set in Ankh-Morpork that doesn't somehow involve the Watch (at which point it becomes a Watch book, regardless of his original plot outline), which presumably explains the creation of protagonist Moist Von Lipwig, who by virtue of his past profession was able to be both a powerful and influential city figure while wishing to have nothing to do with the Watch.

Pratchett became Sir Terry, after being included in the 2008 Christmas Honours list, and was reportedly "flabbergasted". In celebration, he had a sword forged

from Thunderbolt Iron. In 2010, he received his coat of arms

. That same year, he became Professor at Trinity College, Dublin

. In 2012, he ran Narrativia Productions, which is in charge of all future adaptations of his work, including the Good Omens TV series and Terry Pratchett's The Watch. (Narrativia is the Goddess of Narrative, who manifests whenever aspects of a story neatly fit together in a way the writer hadn't expected.)

The events leading up to Pratchett's passing would honestly not look out of place in one of his own books. At a con in 2009, he announced, "I will not die of Alzheimer's. I shall make other arrangements; I'm going to take the disease with me." Sure enough, in 2011, he began the process that would lead to his eventual assisted death.

In 2010, Pratchett became the first-ever novelist (with the assistance of his good friend Tony Robinson) to give a Richard Dimbleby Lecture on this subject titled Shaking Hands With Death. It can be seen here

. In 2014, he withdrew from public appearances due to the development of his Alzheimer's, and ultimately succumbed to the disease on March 12, 2015. Though he had made all preparations for his death and had full intentions of carrying through with his earlier promise, Pratchett ultimately died of natural causes, passing away peacefully in his sleep while surrounded by his family and cat.

◊ of tweets that went on to become one of the most remembered (and tear-jerking) aspects of the mass grieving that followed the news.

The BBC broadcast a docudrama about his life, Back in Black, in 2017. Also in that year, his computer hard drive with all his unfinished work was destroyed by a steamroller per his request.

Tropes associated with Pratchett's work include:

At last, Sir Terry, we must walk together.
Terry took Death’s arm and followed him through the doors and on to the black desert under the endless night.
The End. - three of

During his substitution for the Hogfather, Death runs into the Little Match Girl on the verge of death on the streets. Albert tries to spin her death in a positive light, as a reminder to be thankful for what you have. However, Death is disgusted by this notion and uses his current status as the Hogfather to give life rather than take it, reviving the Match Girl with the gift of a future, before handing her over to some guards so she may have some food and care.

During his substitution for the Hogfather, Death runs into the Little Match Girl on the verge of death on the streets. Albert tries to spin her death in a positive light, as a reminder to be thankful for what you have. However, Death is disgusted by this notion and uses his current status as the Hogfather to give life rather than take it, reviving the Match Girl with the gift of a future, before handing her over to some guards so she may have some food and care.