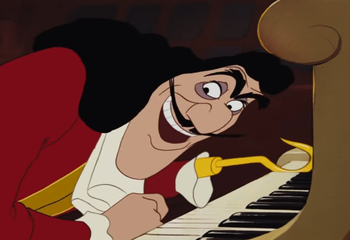 Helmut Spargle: You don't understand. Without the distraction of taste, your mind is free to touch the zen of pure flavor. You could become the greatest chef ever!
Bender: I could?
Helmut Spargle: Yes! Just as Beethoven was a great composer because he was deaf!
Bender: Or like how Rembrandt was blind and had wooden hands!
— Futurama, "The 30% Iron Chef"
Advertisement:

Fiction loves juxtaposition, and so in fiction, you're likely to come across a character with a disability at odds with their art, like a one-handed pianist, a colorblind painter, or a one-legged dancer.

Supertrope to Blind Musician (a musician who cannot see) and Deaf Composer (when an artist doesn't have one of the senses seemingly necessary to create or enjoy their art, such as a painter/sculptor who cannot see or a chef with no sense of taste). Compare Genius Cripple, Disability Superpower. See also The Singing Mute, which is for when a speechless character can vocalize nonverbally.