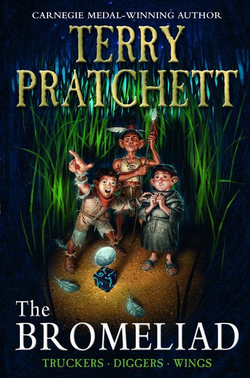 A trilogy of novels for younger readers by Terry Pratchett, consisting of Truckers, Diggers and Wings. It is sometimes known as the "Bromeliad Trilogy", which is both a reference to something that happens late in the series and a pun.

It begins with a small (and shrinking) tribe of Nomes, tiny people who live in woodland near a motorway. Among their few and valued possessions is the Thing, a black cube that is reputed to talk and give good advice.

And one day it does talk, and reveals that it knows the true history of Nomes, how they came to be where they are, and how they can get Home.

There's just one or two small problems they need to overcome first...

Whilst Truckers is unambiguously the first in the trilogy, the second and third are a little more tangled. In short, the first part of Diggers is the direct sequel to Truckers, the end of Diggers and most of Wings happen simultaneously, and the end of Wings is the end of the trilogy.

The trilogy has been adapted for television by Cosgrove Hall. A movie version is in Development Hell.

The trilogy provides examples of: