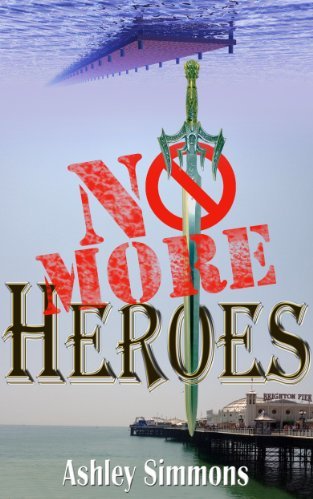 ‘This other place... the mage tells me it exists and I believe him. But I do not think it is a place as we know it. Not a location on our charts or even in our skies.’ He stared out of the tiny cabin window.
‘There are other worlds, other skies. Places we could not comprehend.’ He looked at the mate with eyes hollowed from lack of sleep. ‘From what little I have been told I believe it to be a realm beyond our understanding. A realm of almost pure chaos.’

‘What is this realm?’
‘I know little of it other than a name. I have heard the strangers refer to it as… Brighton.’

is a 2014 Fantasy novel set in modern day Brighton, England, and the magical High Fantasy world of Avia.

Howie, Eddie and Sally have their dull daily lives of commuting, personal issues and tedious routine shattered when they are accidentally transported from their home town of Brighton to a mythical and terrifying world of wizardry and swords by Razz, a naive apprentice mage who is searching for legendary magical beings to save his world from an unimaginably horrific apocalypse.

In this brutal fantasy land they encounter monsters, magic, mercenaries and mind-shattering dimensions of horror, and all they have to help them are an iPod, a management strategy certification and a passing knowledge of Dungeons & Dragons. But in a land of fantasy their normality makes them extraordinary and their belief that even fate itself can be defied starts to affect a world...

As much a deconstruction of the fantasy genre as it is a straight adventure across magical worlds, No More Heroes invokes, parodies and inverts many of the main tropes of Fantasy Novels and Roleplaying Games, occasionally crossing over into Lovecraftian Cosmic Horror.

Not to be confused with that No More Heroes

No More Heroes contains examples of: