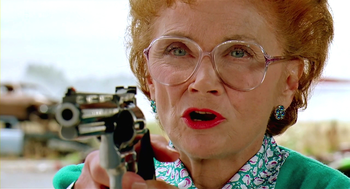 Do you feel lucky, young man?
"Ted, dear, I think you'd better leave. I'm gonna tear this little fella apart from the inside out."
— Gran'ma Ben (shortly after Ted introduces her to Phoney Bone), Bone
Advertisement:

Little Old Lady Investigates. Little old lady is attacked. Little old lady kicks ass. Moral of the story: Never Mess with Granny. If you think a Mama Bear is bad, meet her Mama Bear. Maternal instinct to the power of two; you're pretty much screwed.

She's highly likely to be the matriarch of a Badass Family. Commonly we hear her say that I Was Quite a Looker. She may also be a Retired Badass. Older Iron Ladies will generally be this.

See also: When Elders Attack, My Grandma Can Do Better Than You and Apron Matron. Often a Cool Old Lady.

Somewhat later, she goes out with a literal bang, taking out an army of minions with a bandolier of grenades. (No, she's not the protagonist.)

A mugger learns the hard way that trying to rob a 74-year old lady with a black belt in Tae Kwan Do can be deadly.

A mugger learns the hard way that trying to rob a 74-year old lady with a black belt in Tae Kwan Do can be deadly.