Film / Stop! Or My Mom Will Shoot 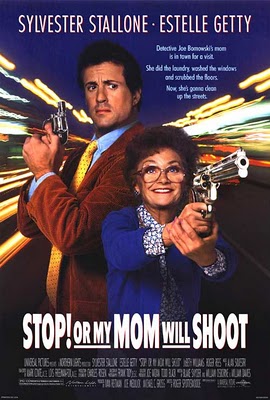 Estelle Getty Is About To Shoot You!
"[M]aybe one of the worst films in the entire solar system, including alien productions we've never seen."
—Sylvester Stallone's blurb on the film
Advertisement:

Sgt. Joseph Andrew "Joe" Bomowski (Sylvester Stallone) is a tough Los Angeles detective leading an antisocial existence. His relationship with his on-again, off-again girlfriend and precinct supervisor Lt. Gwen Harper is on the rocks. He is thus dismayed when his meddling, mind-numbingly annoying mother Tutti (Estelle Getty from The Golden Girls) pays him a surprise visit from Newark.

From the second she sets foot off the plane, she's driving him round the bend: showing embarrassing pictures of him and telling embarrassing stories about him to everyone on the plane and at the police station, insisting he eat a three course meal for breakfast, tucking him in and singing him a lullaby at night, and generally treating him as though he's seven years old. When she cleans the barrel of his gun with a pipe cleaner and thus ruins it, she heads to the hood to buy him a new one. Failing to get one legitimately from a gun store, she buys one illegally. In the process, she witnesses a homicide. She gives false information to the police about the homicide, instead letting Joe take the case on all by himself so he can get a promotion, to his chagrin. She insists on accompanying as he investigates it, to his even greater chagrin.

This 1992 comedy is considered to be one of the low points of Stallone's film career, and as the quote above demonstrates is a source of Old Shame for him.