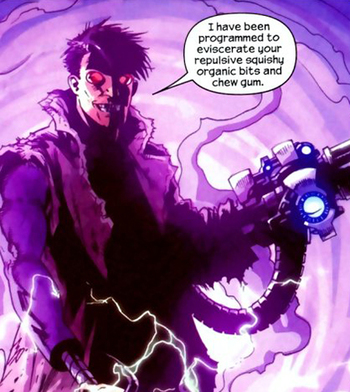 "And I hate gum."
"I have come here to chew bubblegum and kick ass. And I'm all out of bubblegum."
— Nada, They Live!
Advertisement:

This oft-parodied line originated in the 1988 film They Live! (The line was actually ad-libbed by hero and pro wrestler "Rowdy" Roddy Piper.)

The "kick ass and chew bubblegum" quote is referenced quite often for laughs (word for word except for the one part where it's mangled, the reversal is common as many people find it flows more naturally); it's assumed all viewers should know it by name. This is some of the most obvious Lampshade Hanging you will likely find anywhere.

Although it was originally used as a Pre-Asskicking One-Liner, They Live! was a deconstruction of the '80s in general and '80s action heroes in particular, so even there it likely wasn't meant to be entirely serious. In later references it generally indicates an Incoming Ham. Related to this is I Hit You, You Hit the Ground. Not related to an inability to walk and chew gum at the same time.