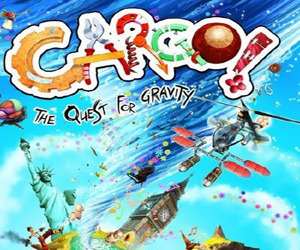 Cargo! The Quest for Gravity is a 2011 PC game taking place in a colorful, low-gravity world where lots of important Earth landmarks have floated off into the stratosphere. The only way to get them back is to imbue them with Fun, a resource harvested from cute little creatures called the Buddies. As trainee mechanic Flawkes, the player must build increasingly complex vehicles to take the Buddies for rides in order to get Fun with which to keep things like Big Ben, the Statue of Liberty, and the Large Hadron Collider from floating off into space.
Advertisement:

Oh, and it's made by Ice-Pick Lodge, a developer known (by the few people who have heard of them) for incredibly bleak and serious games like Pathologic and The Void. ... Huh.