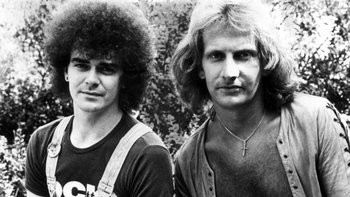 Russell Hitchcock (left) and Graham Russell (right).
Hey, you like love songs? You like soft rock? Do you like it really, really sentimental (dare we say, schmaltzy)? Look no further; Air Supply are the band for you.
Advertisement:

Originating in Melbourne, Australia, the band began as a vocal harmony group, with Russell Hitchcock, Graham Russell and Chrissie Hammond, as a side project of the Australian production of Jesus Christ Superstar. Hammond wound up forming Cheetah instead, so Jeremy Paul joined up as Air Supply began in earnest. Their debut, Self-Titled Album was released in 1976 and achieved gold status in Australia. Debut single, "Love And Other Bruises", set the tone for the remainder of their output, with unabashedly lovey-dovey lyrics, vocal harmonies and syrupy strings.

The band eventually set their sights on the North American market after a tour with Rod Stewart. Love & Other Bruises, the album, was made up of re-recordings of their earlier songs and was designed to be their international breakthrough, but it didn't chart. Jeremy Paul left the band after the recordings, leaving Air Supply as Hitchcock and Russell's band. Yet the setbacks didn't hurt Air Supply too much, and they pressed on with the 1979 album Life Support. This album contained "Lost in Love", which was a hit, and snagged the attention of Arista Records. In 1980, a remixed version of "Lost in Love" was released in America to support an album of the same name, and this became the international breakthrough they'd been looking for.

Air Supply then began a streak of several top 10 singles in America, including "All Out of Love", "Every Woman in the World", "Sweet Dreams", and #1 singles "The One That You Love" and "Even the Nights Are Better". Cementing their American breakthrough, Russell and Hitchcock were occasional hosts on Solid Gold (the beginnings of which was said to be after Andy Gibb started no-showing). The band released their first (of many) compilation albums in 1983, Greatest Hits, promoted with the single "Making Love Out of Nothing at All", written by frequent Meat Loaf collaborator Jim Steinman.

The band couldn't keep up their success into the 1990s, but Air Supply simply broke into other international markets, becoming particularly popular in southeast Asia. Commemorating this were the live album and concert film Now and Forever: Greatest Hits Live, recorded in Taipei, Taiwan; and a Jukebox Musical titled All Out of Love: The Musical, which was performed in the Philippines in 2018.note In addition to the existing songs, Graham Russell also wrote a new song, "I Was in Love with You", exclusively for the musical.

After over 40 years as a band, Air Supply are still touring the world, and are still fondly looked back on by earlier generations and younger fans alike for their patented brand of Silly Love Songs.

Tropes associated with Air Supply include: