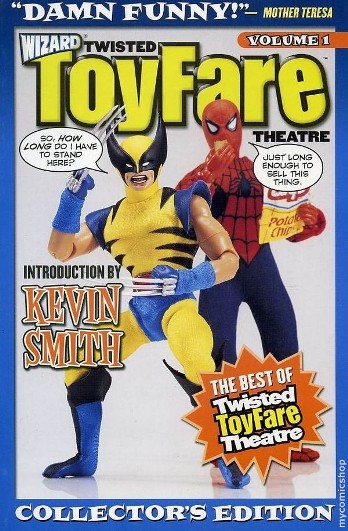 A comic series published every month in Toyfare magazine — an action figure hobbyist magazine and price guide that is humorous in tone — since the magazine began in 1997 and collected in trade paperbacks, "TTT" combines snarking, liberal references to anything in pop culture, tropes on top of tropes, and fair amounts of Black Comedy as a topper.

Twisted Toyfare Theatre originally featured 1970s Mego dolls (many of them customized, and most of those being Marvel characters) as the main characters, although other characters (such as Cobra Commander and the Stormtroopers) have become more prominent as the Megos got stale. note Literally, those things were held together with rubber bands.

Writers Matt Senreich, Tom Root, and Doug Goldstein went on to work for Robot Chicken, which is similar to. Former editor Rob Bricken went on to work for their sister publication Anime Insider, ran the Topless Robot nerd-blog for several years, and is now working for io9.

Wizard shut down Toyfare in 2011, taking the series with it.