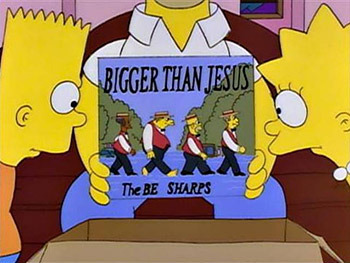 Lisa: I can't believe you're not still popular.
Bart: What did you do? Screw up like The Beatles and say you were bigger than Jesus?
Homer: All the time! It was the title of our second album!
— The Simpsons, "Homer's Barbershop Quartet"
Advertisement:

A Stock Phrase for any good Blasphemous Boast as well as a Stock Shout-Out and Stock Parody to be found in any story about characters becoming famous.

but have since come to be remembered a little differently.

Bigger Than Jesus is a staple for any story about a band that is Borrowing the Beatles, but it can be also found in any sort of narrative about characters gaining sudden celebrity status. Use of the phrase, or a variant thereof, is typically something that is conveyed to be met with shock by the public at large and lead to widespread protests and rallies to destroy the characters' merchandise followed by whoever originally invoked the phrase explaining that he meant something completely different, just like what happened with The Beatles but Played for Laughs.

If a character really does have a level of fame that approaches this, then they're Famed in Story and/or a Living Legend. Sister Trope to Like a God to Me and Answers to the Name of God.

Not to be confused with the Web Comic Bigger Than Cheeses.

open/close all folders
Comedy
Comic Books
Advertisement:
Live-Action Film
Literature
Live-Action TV
Music
Myths & Religion
Print Media
Professional Wrestling
Theatre
Video Games
Web Comics
Web Original
"We would like to apologize for stating last week that The Onion is 'bigger than Jesus'. What we meant to imply is that The Onion is more important and influential than Jesus, not that our newspaper is in any way physically larger than He was. We regret any confusion."
—The Onion
Western Animation
Real Life
Feedback