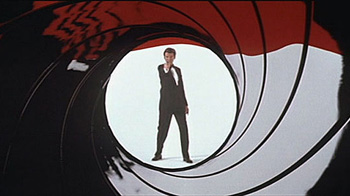 Before The Teaser of almost every James Bond movie, this sequence happens. We look down the barrel of the gun as Bond comes into frame, turns to the camera, and fires his Walther pistol, and a wash of red drips over the screen. The James Bond theme music or a variant may play over this sequence. Its relationship with James Bond has left it the source of numerous imitations, all of the parody nature as the original is basically trademarked by Eon Productions. Try not to think about why the blood appears to be dripping down inside the gun barrel.

The iconic sequence was created by title designer Maurice Binder, who worked on almost every Bond movie from 1962 to 1989, from Dr. No up to Licence to Kill.

See also Sean Connery Is About to Shoot You and Second Person Attack.