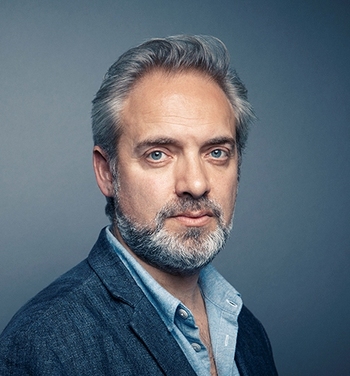 "I want to try and work in different genres with different types of actors, on small movies and big movies."
Advertisement:

His stage career dates back to the mid-1980s, with directorial credits racked up on the West End and with the Royal National Theatre, Royal Shakespeare Company, and Donmar Warehouse (which he was artistic director of from 1992-2002). He's done plenty of productions of Shakespeare, Chekhov, and the like, but is particularly well-regarded for his fresh stagings of musicals such as Oliver! and Gypsy. His much-acclaimed 1993 revival of Cabaret managed a Broadway transfer in 1998 and was his first production to be seen in the U.S.

Shortly after his breakthrough as a stage director, Mendes made his film directorial debut with American Beauty, which netted him a Best Director Academy Award — one of five Oscars, including Best Picture. His film output is definitely weighted towards Oscar Bait, but he also directed one of the most acclaimed James Bond films to his credit, Skyfall, in 2012, and went on to direct its sequel, Spectre, in 2015. Speaking of range, he went from the Skyfall hit directly to a stage musical adaptation of Charlie and the Chocolate Factory.

Common tropes in his works